In the fall of 2002, the late Marquita Elaine Walker-Anderson and Karim T. Aldridge Rand spearheaded the campaign to reform the then defunct Houston Chapter of the Afro-American Historical & Genealogical Society (AAHGS).

The official kickoff was launched on November 9, 2002, at the formal reception of the Willie Lee Gay Collection in the Robert James Terry Library at Texas Southern University.

By April 7, 2003, the AAHGS National Office recognized the reformed chapter, then incarnated as AAHGS H-Town Chapter. The chapter was later rededicated as the Willie Lee Gay – H-Town Chapter during our February 2004 Black History Month Program. 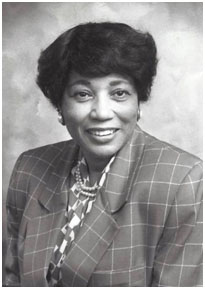 Mrs. Willie Lee Gay was a longtime fourth and seventh-grade history teacher at HISD’s Reynolds Elementary and Woodson Junior H.S. She also taught English at Drew High School in Crosby and was a teaching fellow in the English department at Texas Southern University. She holds degrees from TSU and completed advanced studies at Prairie View A&M, Trinity University and the University of Texas.

Gay’s enthusiasm for preserving history went far beyond the classroom. She became actively involved in a number of heritage-preservation activities, including the establishment of the Rufus F. Hardin Museum, Inc. and projects she worked on after being appointed to the Texas Historical Commission by former Texas Governor Ann Richards.